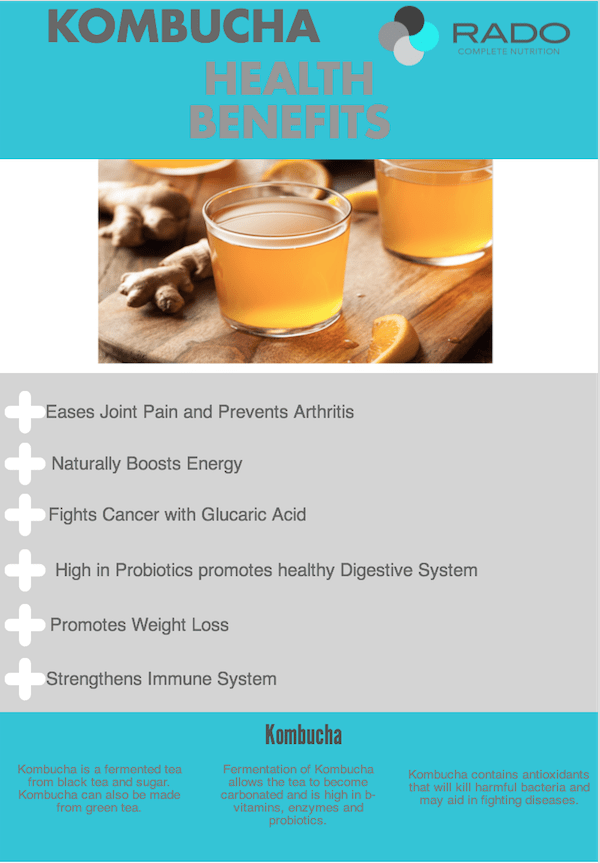 Basic facts you need to know about the health benefits of Kombucha. Kombucha is RADO Nutrition approved and maybe the probiotic you have been missing.

The Health Benefits include the easing of joint pain and prevention of arthritis. It also naturally boosts energy, fights cancer with glucaric acid. Kombucha is high in probiotics and promotes a healthy digestive system, aiding in weight loss and strengthening your immune system.

Kombucha (also tea mushroom, Manchurian mushroom, formal name: Medusomyces gisevii is a variety of fermented, lightly effervescent sweetened black or green tea drinks that are commonly intended as functional beverages for their supposed health benefits. It is produced by fermenting tea using a “symbiotic ‘colony’ of bacteria and yeast” (SCOBY). Actual contributing microbial populations in SCOBY cultures vary, but the yeast component generally includes Saccharomyces and other species, and the bacterial component almost always includes Gluconacetobacter xylinus to oxidize yeast-produced alcohols to acetic and other acids.

Although it has been claimed to have numerous health benefits, there is no good evidence that drinking kombucha has such effects. There are rare documented cases of serious adverse effects, including fatalities, related to drinking, possibly arising from contamination during home preparation. Since the mostly unclear benefits of kombucha drinking do not outweigh the known risks, it is not recommended for therapeutic use. Its teas are made with less sugar may be unappealing.

The exact origins of are not known. It is said to have originated in what is now Manchuria around 220 BCE and was traditionally used primarily in that region, Russia, and eastern Europe. It is home-brewed globally and some companies sell it commercially.

There has been a problem with your Instagram Feed.
Recent Tweets
Go to Top
0