You are here:
Client Success Stories 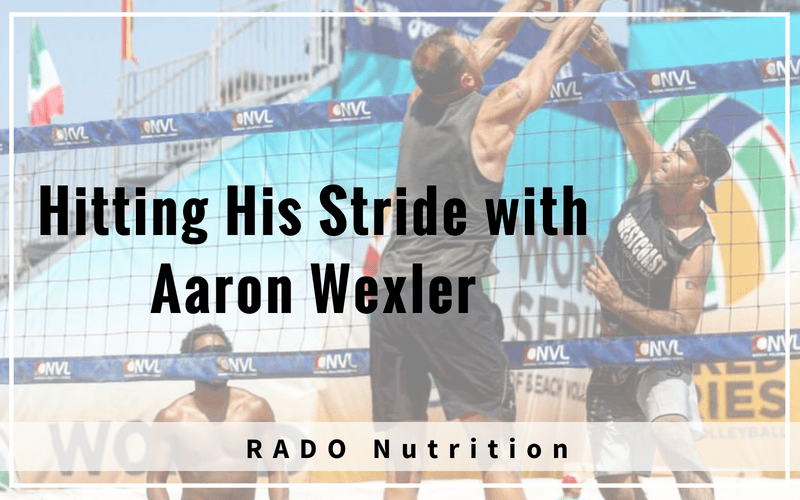 Aaron Wexler was just looking to improve his overall fitness and get into “AVP” shape, -pro beach volleyball shape. The last thing he expected was to get emotional while talking to his nutritionist.

“One of the first questions Lisa asked me was how was my relationship and did I have support at home.”

As a top competitor in beach volleyball, Aaron wanted to return to the Pro Level, so maximizing his physical body was his goal. He was working with sports performance specialist, Dr. Chad Moreau who recommend some blood work and a meeting with me to help him achieve his goal.

I had some in-depth testing done on Aaron’s biochemistry, basically a breakdown of his metabolic levels like sodium, potassium, magnesium, glucose and cholesterol, to name a few.

I also did a comprehensive body composition assessment on the In-Body 570 machine, which gives a far more complex look into fat, muscle and body water.

What we found in his initial screening was high cholesterol and elevated visceral fat levels.

“It was surprising to see how much was going on with my body, to see it all in the blood work and in the body report,” he said.

Aaron has been athletically competing most of his adult life and he was raised in a macro-biotic family. I knew he was educated about clean eating and healthy food. This was not someone who was out of shape or eating all the wrong foods.

As we talked more about his lifestyle, we began to connect the dots between his mental and emotional health to his physical health.

”Looking back now, that may have been more important to what was going on with me physically. At the time, I was in a relationship that wasn’t conducive to my goals. That’s the real answer.”

Aaron needed to detox, but not just from an internal, physical level. There were other toxic behaviors and relationship habits that were directly affecting his body.

“A lot of people, including me, suppress that stuff.” he said, “That was the real deal stuff for me. It made me take a very hard look at things, it was the holistic approach for me.”

He started to really understand how he had developed some bad habits to deal with some uncomfortable emotions in his relationships.

“I was using substance to escape the hard realities of the problems with those relationships. It wasn’t healthy for me at all. The whole thing made me look at this in that equation. And a lot of that was uncomfortable, but turning to substance was not the answer. I was relying on it.”

Allowing himself to be vulnerable was huge. When you expose your vulnerability, you can reach your potential, because it’s no longer your obstacle. That’s what Aaron did by looking at his dependence on using a substance.

I like to say ‘Pain pushes you until the vision starts to pulls you’. Aaron was being pushed to change. Once your vision is in sight, the journey becomes much more enjoyable and doable.  And from my end it’s so fun to see your client being pulled towards their vision.

I started Aaron on the RADO Performance Nutrition 21 day detox. Most athletes I work with do a 21-day detox because they produce more metabolic waste than a non-competitive person.

“I think what Lisa’s detox did for me was a holistic reset. It was a physical and emotional reset. It created new habits. And I’m now very cognizant of each purchase I make and each decision, good or bad. I’m more aware of who I want to be and who I want to be is a driving factor.”

I also focused on clearing out any residual toxicity from his substance use.  Within the first week he was feeling energized, motivated. He could also feel a difference in his performance and improved recovery.

Honestly, it was inspiring to watch as Aaron was undergoing a massive mindset shift and emotional cleanse.  There was an incredible physical transformation. 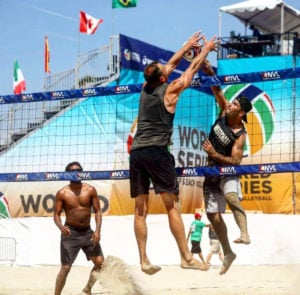 Aaron was a perfect client in the sense that he was coachable. He was open to looking at all aspects of himself and his life to be better.

I suspected that some of his elevated cardio metabolic markers that we saw in his initial tests would clear up with a detox, so I did not have Aaron take supplements for that. Instead, I used products to help support his emotional and physical performance.

As a nutritionist, it is often about following my intuition when it comes to what my clients need. Test results are one thing, but I look at all factors. For Aaron, I felt he needed something to support his brain chemistry or neurotransmitters and his energy system.

It’s so important to me that my athletes feel the difference in their bodies. The products I recommend are designed to help them be more aware of what’s happening and the “experience in their bodies”. We know pretty quickly if what I am giving them is working. I don’t need bloodwork to tell me this.

“I needed to detox,” he said of his lifestyle. “It took a couple of weeks for me to really find that clarity. The first couple of days were kind of tough going through withdrawal of caffeine and other things” Many clients experience these symptoms.

“After a few weeks, I felt the intuitive nudge and I became more clear. My physical strength was improving and I felt lighter. I dropped over 20 pounds. My visceral fat dropped three levels. I could see it in my physical appearance, too.”

Part of Aaron’s motivation was to prepare for a tournament that was held this past spring and while they lost in single elimination, he felt he played well and could see his performance as a positive.

“I’ve been practicing healthy detachment,” he says. “whatever happens, happens.

While he was competing at the tournament, he was approached by a fellow player.

“Someone came up to me and was like, ‘Hey, it’s the new Wex!’ Hearing that definitely feels good. It doesn’t really matter what other people think, but it’s nice to hear.”

“Working with Lisa was a game-changer for me. I’m 35-years-old. And after being on the RADO plan, I feel like I’m 25 again. I’m going against 20-25 year olds. And I get tired quicker, but my recovery has gotten better.”

It’s been several months since I began working with Aaron and we continue to tweak his overall plan and supplements, as his body gets stronger and leaner. He’s sleeping better and feeling happy with the results. Now it’s about finding balance within the program and his life.

“I’m taking the principles and concepts and reframing the way I choose my foods and my meals. Coffee was on the “AVOID” list and for a while I had no coffee, but the other day I finally had a cup of coffee. I’m not maybe doing it to the tee, but still following the framework.”

What Aaron calls his “framework,” I call “structured flexibility”!  Aaron’s sends me photos of his meals, includes RADO Nutrition in his Instagram stories and has truly embraced this new lifestyle.  His program continues to support his physical and emotional status including recovery from exhausting consecutive day tournaments.

These are the supplements I prescribed for Aaron’s improved strength, recovery and energy:

As with many of my clients, I go beyond the test results and goals they might have for their physical body. Getting to know my clients and their lifestyle helps me better understand how I can help them be their best, on every level. 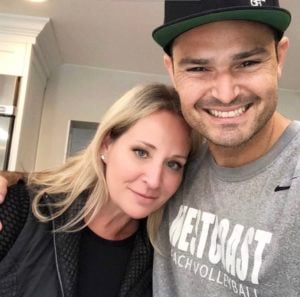 “Lisa is an empath. I like that she has the empathy of someone who really, really cares. I love her sense of humor and how she approaches life in a light but she’s also super focused.”

I believe that’s my job when it comes to working with my clients; to explore what my client’s limiting factors are and why aren’t they reaching their potential. In Aaron’s case, it was his home life, lifestyle and avoidance patterns.

“For me, I used to be so result drive,” Aaron says of going after a specific win or goal for a tournament, “but it’s way less that now. For me, it’s about the moment and really being happy and grateful for the moment. “

“I know there is gonna be a day when I’m not competing and I want to try and love the moments I do get to compete. And that’s being in the zone. That’s when you can perform at your best.”

Finishing The Race And Pushing Through: A Paddleboard Racer’s Story of Perseverance And Pesky Sharks
December 15, 2017