Finishing The Race And Pushing Through: A Paddleboard Racer’s Story of Perseverance And Pesky Sharks

You are here:
Client Success Stories 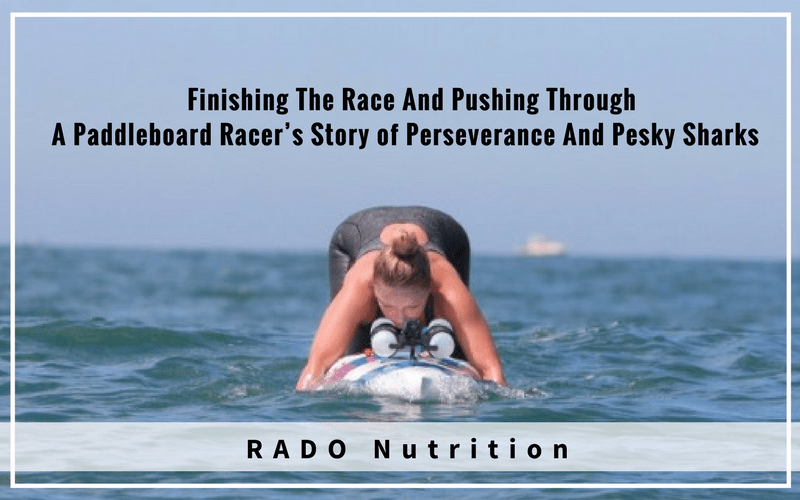 This is one of my clients, Heidi Gastler, who is a physical therapist and competes in the sport of prone paddleboard racing. I call her a badass.

As an integrative health coach and nutritionist, I work with incredibly talented athletes from all walks of life; moms, actors, NFL players and Stanley Cup Champions. I am constantly amazed at what they push their mind and bodies to do, and I love supporting them with smart nutrition and personalized supplements so they can be their best. They inspire me as I think they do many people so I’ve decided to tell their stories and share some the unbelievable things they have achieved in the name of sport.

A Race Course With An Attitude

A 32-mile race course of any kind is a challenge, but when finishing it requires dodging a pesky shark and overcoming wind and weather, all while paddling with just your arms, that requires perseverance on a whole different level.

“By mile 16, this turned from a race into basically a survivalist activity,” said 37-year-old Heidi.

Just three years in the sport, she’s learned pretty quickly that it takes mental toughness as much as physical stamina. This year’s Catalina Classic was the epitome of just how brutal racing can be.

The Catalina Classic is one of the oldest and most celebrated “traditional and original paddleboard races”. The 32-mile race from Catalina to Manhattan Beach, California attracts top racers from all over the world. After her first year in the sport and competing in her first Classic, she started working RADO Nutrition in hopes of improving her time.

I created a customized a plan of supplements and nutrition helped her gain 10 pounds of muscle mass, gave her better quality sleep and kept her from getting run down and sick.

“I was absolutely thrashed from sleeplessness and work stress,” she says. “I was in full-on adrenal fatigue. I really wanted to have a crack at the Classic in my second year. With Lisa’s help, I shaved 40 minutes off my previous years’ time.”

And while she felt confident about setting a personal best heading into her third Classic this year, the race course and Mother Nature had something else in mind.

Heidi described this year’s race conditions at an “all-time low” and began with a 2-mile-an-hour head-on current along with a side wind. It was a battle from the beginning. Even the most competitive and experienced of racers were struggling to keep their normal pace.

By mile 15, she was paddling past racers who were quitting because of how unmanageable the course had become. By mile 16, her escort boat driver (each racer has one for safety, navigation and nutrition) had to “intervene” between her and a rather large shark that gave cause for concern. Her captain would later tell her that this shark was erratic, had breached the front of the boat and was tailing her.

As if that wasn’t enough, by mile 20, she began vomiting. At mile 22, a wind took her way off course into Lunada Bay and she would have to fight her way out of the kelp to get back on track. “This is literally the stuff our nightmares are made of,” she said of the conditions.

A competitor and sports enthusiast her whole life, Heidi grew up Edina, Minnesota, skiing and snowboarding and summers at a family cabin full of waterskiing, swimming and boating.

She moved to California for a job in 2011 for her career as a physical therapist. Like most California transplants, she had dreams of becoming a surfer. Quickly realizing that wasn’t the sport for her, she moved to trying a stand-up paddleboard but said it just never felt right. It was the prone paddleboard, belly-down and paddling with your arms, that changed everything. She was hooked.

“I realized what I was missing with the standup was the feeling of being connected to the water…. your arms physically in the water,” she says. 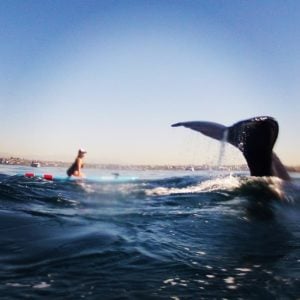 Whales, Dolphins and Sharks, Oh My!

Heidi says she loves the sport because it challenges her mentally and physically to push herself but she also loves the community of paddlers she’s come to think of like a family.

And then there’s the thrill of being out in the water. For Heidi, that never gets old.

“I love getting out in the water and seeing things I never dreamt of seeing as a kid. Whales! I love whales! And dolphins who will swim and play with you. Even the sharks. I could go and on about sharks and the beauty of seeing them versus the fear.”

How To Be A Badass

With ten miles left to cross the finish line in this year’s Classic, her boat captain told her the race committee had informed him she would be a DNF (did not finish) due to time limits. Faced with that reality, Heidi says her choice became very black and white. Either be DNF or “finish the damn thing.”

For Heidi, there wasn’t any other choice. Fighting her way to the finish line, she passed more and more paddlers who were quitting but she wasn’t ready to live with that choice after the race was over.

She says now that it was the commitment kept her in the race; to herself, her boat captain with her ‘til the end, her friends, family, and boyfriend Tuffer who were all waiting to cheer her on as she crossed the finish line. And she felt a commitment to her patients she treats in her job who live with the physical limitations of their body everyday.

To her, it was an honor to even get to compete in the Classic as there were some racers who didn’t get in. “Despite it going horribly wrong in every possible way, I knew that I could physically do it as long as my mental fortitude stood up.”

“I finished along with another 5 or so hard-headed paddlers who apparently heard my boat captain on the radio channel telling the race committee that I refused to get on my boat and was finishing regardless.”

“Frankly though, if my nutrition on race day had failed me this year, I never could’ve been on the water that long.” Heidi finished with a 9 hrs 53 min finish, a far cry from her hope of setting a personal record 7 hr 30 min. In this race, just finishing was the accomplishment.

Seeing And Feeling The Difference

Using RADO Nutrition to improve her time, energy and quicker recovery gave her the stamina to go the distance.

With the demands of owning her own physical therapy business Mountain to Sea Physical Therapy, Heidi’s lifestyle and her sport are constant and on-the-go.

The personalized supplements and training nutrition included a high dose of Vitamin D, magnesium and a PS 150 supplement. She also needed adrenal support supplements, which Heidi found critical to help her through the stress of everyday life and the intense training for paddling.

“I can consistently train hard while still working a zillion hours and not be falling back into the adrenal slump of fatigue, malaise and illness,” she says of the marked improvement. “Being able to still get after it day after day has been key for me.”

We Love It When A Plan Comes Together

“I think that really set me up for success,” she says of the detox. “I have never liked “cleanses” like a juice cleanse. They’ve never made me feel good, during or after. But the RADO Nutrition system of detoxing was really different and gave me a boost in the right direction. I still go back to two-week cycles of that detox every few months now to refresh.”

Adjusting the program to meet Heidi’s goals this year helped her get leaner, as she felt strong but bulky. We included rounds of intermittent fasting along with supplements to continue to support her training. “So far so good, and it’s been very do-able with her guidance,” she said. 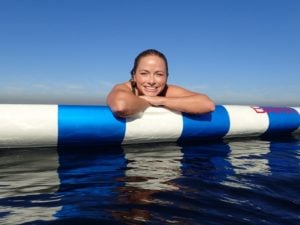 Heidi has already set her sights on another year of paddling, just as soon as she’s done with ski season. She hopes to race in her fourth Catalina Classic in 2018.

She says that not crossing the finish line at the Classic this year would have left her with a nagging feeling of unfinished business and for her, that would have been far worse than any physical pain she experienced even in the worst moments. She prepared her body and mind to endure the best and worst, and in the end, the winning was in just finishing the race.