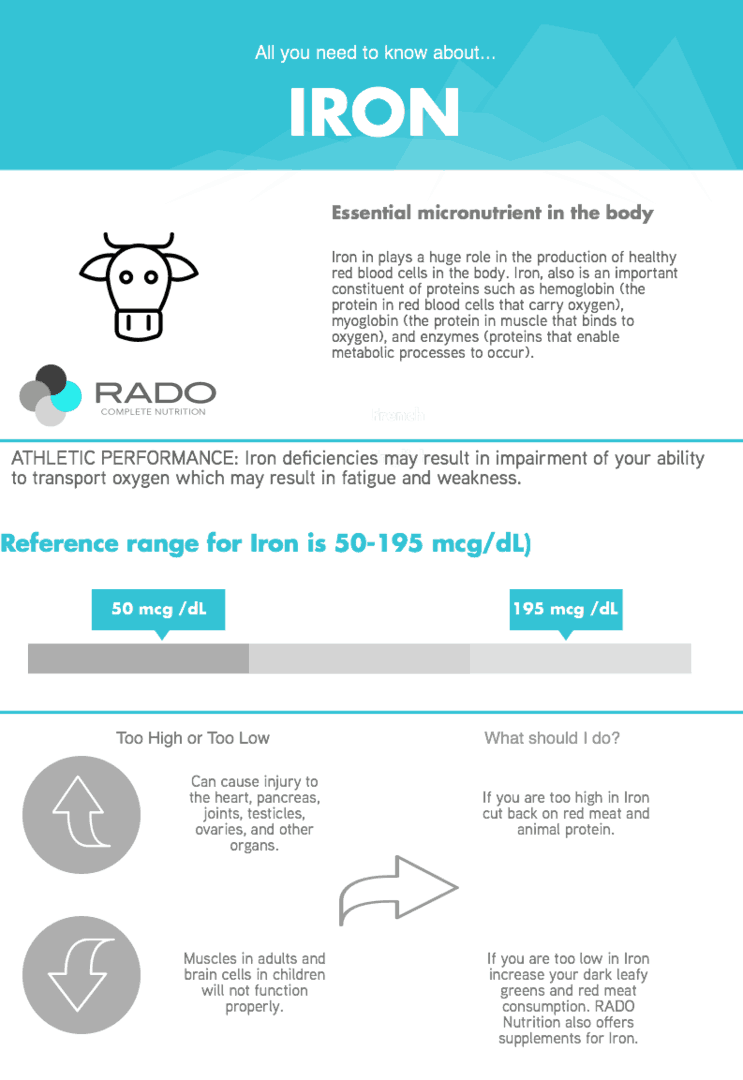 Everything you need to know about Iron. Rado Nutrition up to date blog on nutrition and supplements you may need. It is vital to your health. It is key to proper muscles function for adults and proper brain function for children.

Iron-deficiency happens when a body has not enough (or not qualitatively enough) to supply its eventual needs. It is present in all cells in the human body and has several vital functions, such as: carrying oxygen to the tissues from the lungs as a key component of the hemoglobin protein; acting as a transport medium for electrons within the cells in the form of cytochromes; facilitating oxygen enzyme reactions in various tissues. Too little can interfere with these vital functions and lead to morbidity and death.

Total body averages approximately 3.8 g in men and 2.3 g in women. In blood plasma, it is carried tightly bound to the protein transferrin.

There are several mechanisms that control human iron metabolism and safeguard against deficiency. The main regulatory mechanism is situated in the gastrointestinal tract. When loss of it is not sufficiently compensated by adequate intake from the diet, a state of iron-deficiency develops over time.

When this state is uncorrected, it leads to iron-deficiency anemia. Before anemia occurs, the medical condition of Iron-Deficiency without anemia is called Latent-Iron-Deficiency (LID) or Iron-deficient erythropoiesis (IDE).

Untreated deficiency can lead to deficiency anemia— a common type of anemia. Anemia is a condition characterized by inadequate red blood cells (erythrocytes) or hemoglobin. Iron-deficiency anemia occurs when the body lacks sufficient amounts of iron, resulting in reduced production of the protein hemoglobin. Hemoglobin binds to oxygen, thus enabling red blood cells to supply oxygenated blood throughout the body.

Children, pre-menopausal women (women of child-bearing age) and people with poor diet are most susceptible to the disease. Most cases of iron-deficiency anemia are mild, but if not treated can cause problems like fast or irregular heartbeat, complications during pregnancy, and delayed growth in infants and children.

There has been a problem with your Instagram Feed.
Recent Tweets
Go to Top
X Close
0